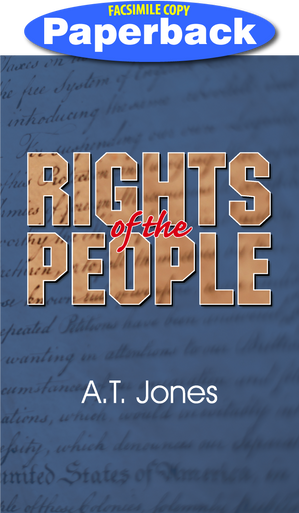 Rights of the People, The / Jones, Alonzo Trevier / LSI

Alonzo Trévier Jones (1859–1923) spoke before a United States Congressional subcommittee in 1889, to oppose the Breckinridge Bill, which sought to compel Sunday observance in the District of Columbia. He soon became a world-famous writer and speaker for religious liberty. He served as co-editor of The American Sentinel, a public magazine defending the principles of freedom in the United States.

His desire was to awaken more interest in the study of the Constitution and the Bill of Rights, which would clarify the understanding of men’s liberty of conscience. This book will help each reader to see the relation that should exist between civil government and religion, according to the words of Christ and the American Constitution.

Alonzo T Jones (1850-1923) heard the Adventist message while serving in the United States Army in the State of Washington. He began at once to study history as it related to prophecy, a theme of much of his writing of articles and books. This study also prepared him for his activity on the subject of religious liberty. He participated in the hearings of the Blair Sunday bill in 1889 and became editor of "The American Sentinel."

Elder Jones was a powerful speaker and one of the strong voices in the revival of 1888 within the Adventist denomination. For a short time he was a Bible teacher at Healdsburg College. From 1897-1901 he was the editor of the Review and Herald, and he served on the staff of the Signs of the Times.

Author of The Empires of the Bible, The Consecrated Way to Christian Perfection, The Great Empires of Prophecy, The Two Republics, and The Third Angel's Message.