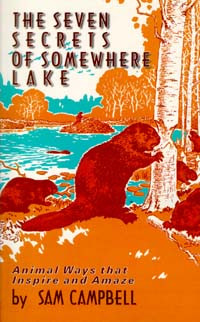 The Seven Secrets of Somewhere Lake is one of the best books that have come from the pen of this popular author, photographer, lecturer and naturalist.

In the summer Sam and Giny plan to make a movie film of the Grand Canyon country. This year, they say, there are to be no baby animals taken in to be cared for. No sooner do they make this resolve than fate dooms it, with several large snickers. They have no choice but to "adopt" in rapid succession: Zipper, a half-starved fawn; Zowie, a baby red fox; Zanie, a taffy-colored puppy, and Zinnia, a tiny skunk! Then, as if that isn't enough, seven young beavers are literally dumped into Sam's lap.

Sam Campbell, writer, lecturer and photographer, is known throughout America as the Philosopher of the Forest. He is a naturalist, a devoted student of living nature. His home, the Sanctuary of Wegimind, is in a game preserve in the great forests of Northern Wisconsin. There he studies the ways of wild creatures, their habits, their work, their play, and the examples they set for human beings in right living. Hundreds of thousands of people have become acquainted with his work in nature through the four thousand lectures he has given in the past twelve years.