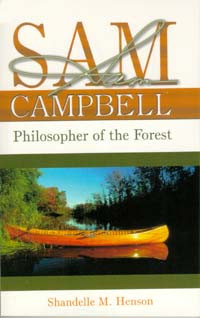 Sam Campbell, the "Philosopher of the Forest," was a legend of the North Country. Once met, he was never forgotten, for he was a fountain of inspiration and buoyant enthusiasm. As one of the early pioneers in the environmental movement, his efforts were aimed at educating and entertaining people in hopes of raising their consciousness. Sam respected the merging breed of politically active conservationists, and acknowledged a great need for them. However, he found that his own personality was much better suited to low-key, friendly efforts to help people appreciate nature and thus lift their thoughts to more lofty values.