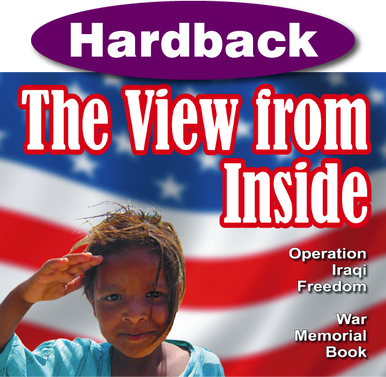 View from Inside, The / Sauve, Tamie / Hardcover / LSI

I wondered that night, as my family lay asleep, safe in the seclusion of their bed, who those people on the nightly news broadcast, might have been. The announcer stated, “a roadside bomb had killed five more soldiers.” Their names would now be added to a long and growing list of the fallen during the beginning of Operation Iraqi Freedom. That night, although I didn't know it then, was the beginning of a new and life-changing journey, for my family, and me as well.

As weeks passed, I found my thoughts, going back to that night. It was an idea that had come to mind. Someone should create a book to preserve and honor, the names of those who made, what could only be described as, the ultimate sacrifice.

It took some time to speak my thoughts to anyone, of what I wanted to do. They would surely think I had gone crazy, thinking it possible to accomplish such a daunting task. I knew myself, the road to achieving success; would be long and unpaved.

I first told my daughters, they were supportive yet skeptical, or so I thought. It was a few days later when Khoe came down one morning for school, she handed me a paper on her way out. I said to her, what is this; she stated it’s a poem for your book. Later that morning I read what she had titled, “Leaving.” “Leaving” ended up being the lead poem out of six; that she would continue to write in four years, for this memorial.

The final approach was my sister Joyce, I asked her on the phone, if she would help me, because I wanted to write a book. She asked what about, I told her and there were no more questions asked, she was on board too.

My spirit could have been broken very easily, many times during our efforts, by many closed doors. However; it was those few open doors for help, that moved us forward. It was not only facts learned, that helped put this memorial into formation, but more public opinion and life's experiences shared, that brought it to its final completion.

There were instances such as, a total stranger looking for yellow ribbon in my store one day. She stated her son-in-law was serving in Iraq and her son was soon to deploy. As she left, her final words to me were, “I wish someone would find a way to show the good that comes from this war, instead of the negative the media displays.” It was from that moment forward; I knew what this memorial should be about.

Another moving moment was a mother's statement in reflection to the loss of one of her sons and the brave actions of another. She stated in an email to me, “Time has passed, it will be a year in June already… where does the time go? Some days are easy; some are hard to just roll out of bed. My other son graduated from Marine boot camp and is presently in the School of Infantry, just like his brother. I think he did this to feel closer to him.” This was kind of bittersweet for me.

An email coming straight from the war zone in Iraq on Easter Sunday stated, “attacks against us have increased, but the level of camaraderie is unprecedented. It is amazing; brothers are we, all in a common goal. The need to be spiritually right is ever so evident right now. We all will die some day and it is according to our lord’s purpose. It is the one thing that helps us to go on with morality and dignity!” These words reflect and ring true to all who have loved ones serving in war.

We must remember that this memorial is not about whether you are for or against this war. This is about remembering all of the individuals, who go unrecognized everyday, for their bravery and sacrifices made to defend our freedom and safety.