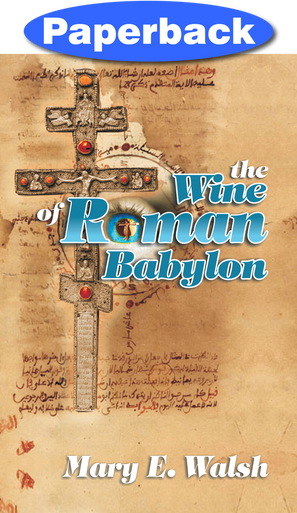 Mary E. Walsh (1892-1997) was born into a RomanCatholic family in Ireland. Her forbears for many generations back were confirmed believers in the doctrines of the papacy. Baptized into the Roman Church when only one day old, she continued a faithful communicant of that religious body for 20 years. Then becoming interested in reading the Sacred Scriptures, she was led by her study to renounce the papal faith. Thereafter devoting her energies to the propagation of the evangelical doctrines found in Holy Writ, she had many years of success in teaching the gospel truths to others.

This book does not propose to delve into the abstruse, philosophical discussions by notable theologians of the Roman Catholic Church, but rather presents a candid and practical study of the principal papal doctrines as they are taught to the rank and file of that sect. This edition contains her last update to the book with Appendixes to each chapter.

1. Babylon the Great
2. Tradition
3. Infant Baptism
4. Auricular Confession
5. Penance
6. The Mass
7. Omission of the Cup
8. Masses and Purgatory
9. Peter and the Rock
10. Peter and the Keys
11. The Immaculate Conception
12. Invocation of the Saints
13. Immortality of the Soul
14. Eternal Torment in Hell
15. Extreme Unction
16. Sunday Observance
Appendix
Bibliography