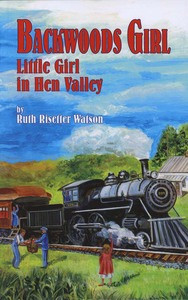 Ruth climbed up the running board and scooted down the front seat of the new Tin Lizzie. Her father said to not be afraid when he cranked up the motor. "Do be careful," said Mama. "You know many men have broken their arms or sprained their wrists cranking." "I'll be careful. Just sit tight and don't scream or jump out," said Father.

Ruth was on her way to live in the mountains of East Tennessee. As she grew up on a farm in the shelter of Walden's Ridge, she encountered dangers as diverse as harrows and hornets, screaming locomotives and car thieves. She drew water from a well and bathed in a washtub. She marveled at the majesty of the Harvey Hannah mansion and the variety of goods for sale in Sienknechts General Store. There were no conveniences such as electricity, running water, telephones, or good roads. Horses were still used for work and transportation, but Fords were fast replacing them.

This book details the simple, yet often painful, experiences of mountain life in the late 1920s and early 1930s. As Ruth grew up, she found that helping others was also like planting—sharing love or encouragement could grow as seeds of joy in someone else's heart