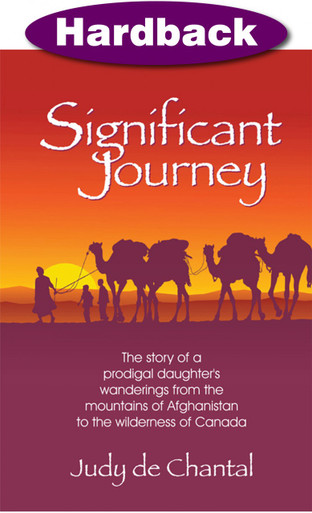 The story of a prodigal daughter's wanderings from the mountains of Afghanistan to the wilderness of Canada.

As a young adult, Judy Williams de Chantal left her job in the Pacific Northwest to spend a year traveling throughout Europe, the Middle East, and Asia with a close friend from Canada. But being arrested in Turkey was not on her original itinerary—neither was the quiet French Canadian she was arrested with—nor the “American-speak” dentist who happened to be on jury duty. Nor were pretty much all the conclusions Judy eventually arrived at on her journey.

Significant Journey chronicles the adventures of one woman—jean clad and gypsy-footed, who survived on five dollars a day, a Mars bar, and a chunk of cheese for dinner as she traveled around the globe and unwittingly back into the arms of a Father she thought she left behind. A prodigal daughter in a Volkswagen van, it didn't matter how far she drove—Afghanistan, Greece, Iran, or even into the wilderness of western Canada—Judy sensed God’s hand of protection at the end of every road she traveled.

Judy Williams de Chantal was born in Seattle, Washington, and grew up on Wrangell Island in Southeastern Alaska. She graduated from Auburn Adventist Academy in 1958 and Walla Walla University in 1962 with a bachelor's degree in nursing. She worked in public health and school nursing in Maryland and the Puget Sound area of Washington for several years.

After the events in this book, she and her husband settled on the Olympic Peninsula in Washington State where they raised their family on a farm full of sheep, goats, and horses.

She has always been interested in writing from an early age. During her senior year in high school, she was the editor of the school paper. She went on to write humorous articles for Public Health and Tennessee Walking Horse Publications and has had a couple of stories published in Christian publications for young people.

Hiking, bike riding, reading, oil painting, knitting, and designing children’s clothing are a few of her hobbies. Her oil paintings have sold through galleries and through her Web site (https://www.gypsysong.net/) to customers from Japan to Israel.

This title is available in e-book format.