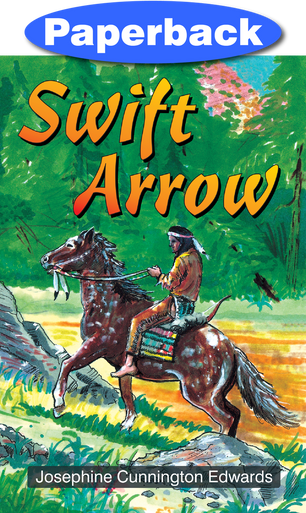 Colored leaves, red, yellow, and brown, fluttered past George as he rode behind Woonsak in the long string of Indians and ponies. They were riding north and moving quickly. So many Indians moved along the path that George, who rode near the front of the line, could not see the end when he turned around to look. The farther they went, the more unhappy George became. For with every step, Neko (his faithful pony) took him farther and farther from his home and from Ma and Pa. Even the fluttering leaves seemed like little hands waving good-bye all the day long.

So begins chapter seven of this beloved classic by Josephine Cunnington Edwards.

George, a young pioneer boy is captured by Indians and raised as the son of a mighty chief. He spends his time learning the ways of these native Americans, and yearning for the day that he might find a way to return to his loving family.

The above links will open in a new tab/window