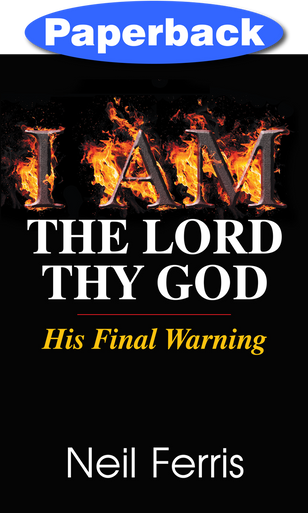 I AM The Lord Thy God: His Final Warning / Ferris, Neil / Paperback / LSI

When God spoke to Moses from the burning bush and called him to lead the Israelites out of Egypt, Moses questioned God and asked Him whom he should say had sent him to free the people. God responded by saying, “Tell them that I AM has sent you.”

Just as Moses called the children of Israel out of Egypt and warned the king as to the consequences if he did not heed God’s call, a similar message is written in God’s Word calling His people to come out of Babylon before the earth is destroyed.

I Am the Lord Thy God: His Final Warning seeks to prepare readers for Jesus’ second coming and the destruction of the wicked. By studying the prophecies of Daniel and Revelation and allowing the Bible to interpret itself, readers of this book will gain a clearer picture of the future, God’s ultimate authority, and His final warning to the inhabitants of earth.

Neil Ferris lives in the province of Saskatchewan, Canada. A dedicated Bible student, Neil studies and writes in his spare time. One of his favorite Bible texts is Isaiah 44:24, which says, in part, “I am the LORD, who makes all things, who stretches out the heavens all alone, who spreads abroad the earth by Myself” (NKJV).