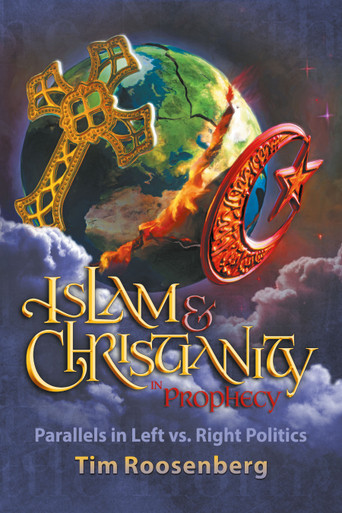 The headlines are unmistakable. Our world is on the precipice of extraordinary, cataclysmic change. The conflict between two great world religions—Islam and Christianity—is fast approaching a devastating climax that will shake the whole world.

Indeed, the fact of Western Europe has already been transformed through rapid Islamic expansion, and the fear of terror and holy war pervade the American psyche as multiple conflicts rage in the Middle East.

But what happens next, and when? In an age of constant unpredictability, how can we really know what the future holds?

After a decade of careful study and scholarly legwork, international speaker Tim Roosenberg unveils a staggering new study of Bible prophecy that demonstrates that God’s Word is not silent regarding Islam in these last days.

Islam and Christianity in Prophecy carefully explores and unlocks the mysterious book of Daniel, specifically chapters 11 and 12, unveiling a thrilling picture of prophecy that includes the past, present, and future roles of Catholicism, Protestantism, Islam, and the United States in the final conflict ahead.

Along the way, Pastor Roosenberg provides the answers you need to survive the coming holy war, answers that will give you complete confidence in God’s Word, and faith in the promises of Jesus Christ.

“From the ancestors of Abraham sprang the world’s two largest religions today, Christianity and Islam. While there is still much that is unknown, it is hard to deny that Islam will have a significant role in last day prophecy. With Scripture, history, and reason, Pastor Tim Roosenberg presents a compelling scenario for the prominent place of Islam in future prophecy.” —Doug Batchelor, Amazing Facts International

I am a big-picture person. I think on the big picture and the trends, not so much in the details. After being immersed in history and Bible prophecy for more than 30 years, I’ve come to have a feel for it. In 2002 I had an “aha” moment, an epiphany of sorts, about the central meaning of Daniel 11. Following that “aha” moment I spent several years testing my findings, and I have now, I believe, confirmed them after checking sources and consulting with scholars and researchers.

I am indebted to all who have challenged my conclusions, as they have led to a continued study that has proven this understanding of the Daniel 11 prophecy to be accurate.

I got into this study during the 1970s as a freshman in college. Since I didn’t enjoy writing, I decided that if I had to do a composition paper, I would write about something that I like––Bible prophecy.

As I studied the various methods of prophetic interpretation, I discovered that the way of the Reformers (Luther, Calvin, the Wesleys, and others) for understanding Bible prophecy, known as historicism, is much more accurate and true to the Bible text than the methods used by most prophecy teachers today.

Historicism is a method of interpretation based on the idea that biblical predictions, instead of something reserved solely for the future, have not only been fulfilled throughout history but continue to be fulfilled today.

Because of my study, this book is built on history and Scripture, illuminated by the Reformers’ understanding of prophetic interpretation.