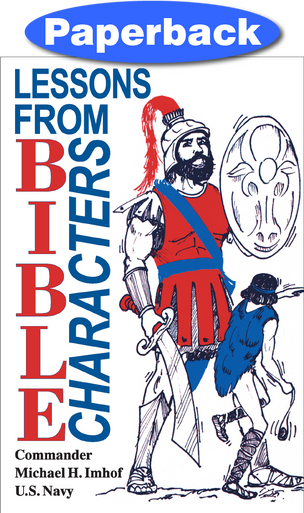 After writing a couple of articles on lessons learned from Bible characters for a professional bulletin, Commander Imhof decided to write a small book on this subject since many readers have been blessed and encouraged from the lessons presented. He has done so with great success.

Commander Imhof has served three overseas tours of duty and assignments on the east and west coasts of the United States. On 17 December, 1981, he was HIJACKED in Southern Lebanon while on duty in support of the United Nations Truce Supervision Organization. He believes his later escape was truly a blessing of God. A man of strong Christian convictions, he has successfully incorporated much knowledge gained from his many experiences and endeavors into this book which makes for interesting reading. This straightforward and insightful analysis of Biblical characters and situations encourages, edifies and inspires. The material is written in simplicity and clarity. It is outstanding reading for teens and adults. It has something to offer for all. HIGHLY RECOMMENDED!

Commander Michael H. Imhof, U.S. Navy (ret.), and former Navy SEAL was born in Fort Bragg, North Carolina, and raised in Blasdell, New York. He attended the State University College of New York at Buffalo, where he received a Bachelor of Science Degree. He was commissioned in 1973. After completing Basic Underwater Demolition/SEAL training, Commander Imhof was assigned to SEAL Team TWO, subsequent Naval Special Warfare commands, and other duty assignments. A graduate of the U.S. Army Special Forces Officer Qualification Course, he also earned a Master’s Degree in Administration from George Washington University and served as an instructor at the U.S. Naval Academy. He has numerous service awards.