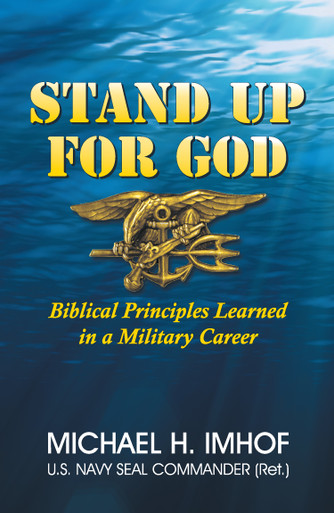 Travel with Commander Michael Imhof around the globe and learn about what it means to Stand Up for God. The former U.S. Navy SEAL shares his many experiences including Basic Underwater Demolition/SEAL training, being HIJACKED in Southern Lebanon, assignments at SEAL commands, and working with officers from the Soviet Union. These vivid stories, plus many more, will show the reader what it's like to be a fearless Christian in a sinful and selfish world.

Commander Imhof, possessing a Naval Special Warfare designator, has served his country in numerous positions. Assignments include Platoon Commander, Training Officer, Operations Officer, Staff Officer, Executive Officer, and Commanding Officer. He has used each of these opportunities to shine the light of God to those in darkness and invites us to share in this journey—a journey that is not always easy, but always rewarding.

His material is concise and written in simplicity and clarity.

Commander Michael H. Imhof, U.S. Navy (ret.), and former Navy SEAL was born in Fort Bragg, North Carolina, and raised in Blasdell, New York. He attended the State University College of New York at Buffalo, where he received a Bachelor of Science Degree. He was commissioned in 1973. After completing Basic Underwater Demolition/SEAL training, Commander Imhof was assigned to SEAL Team TWO, subsequent Naval Special Warfare commands, and other duty assignments. A graduate of the U.S. Army Special Forces Officer Qualification Course, he also earned a Master’s Degree in Administration from George Washington University and served as an instructor at the U.S. Naval Academy. He has numerous service awards.