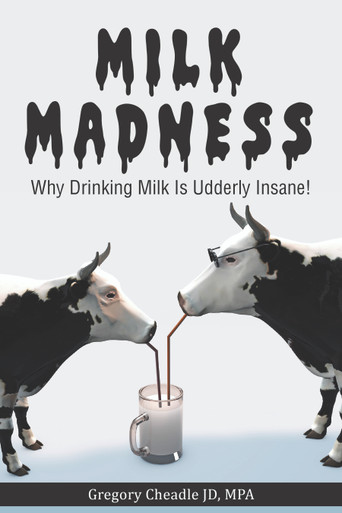 Leaning heavily on scientific and medical language, this book is not for the faint of heart. In it the author makes a case for giving up milk and meat. He categorizes the use of milk in the diet as “udder nonsense,” and quotes book after journal after scientific paper to back up his premise.

With over 9,000,000 milk cows in the U.S. alone, each generating an average of 80 pounds of poop per day, the vast quantities of feed and water required to produce milk, millions of acres plowed over for large, monoculture crop fields dedicated to feeding livestock, deforestation for agriculture in South America, and the Midwest losing its native prairies and grasslands for farming create an inconvenient truth affecting the planet we can no longer ignore.

Gregory Cheadle studied the physical and social sciences while earning his BA in psychology with an emphasis in physiological psychology and MPA with a concentration in Healthcare Administration. Cheadle also earned a JD and is completing his PhD studying prostate cancer and theranostics at Loma Linda University. Not a stranger to controversy, Cheadle has made appearances around the globe, most notably CNN, ABC, NBC, CBS, Newsweek, people.com, and even the Stephen Colbert Show. It is his hope that Milk Madness will serve to inform not inflame, educate not alienate, and most all to help people become healthy!!! For more information visit https://1ref.us/r9457127