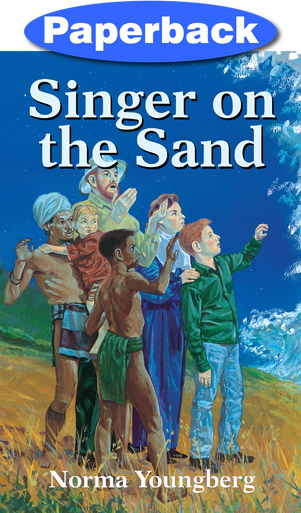 An incredible, true story of a missionary family who landed on Great Sangir Island, just south of the Philippines in the Pacific Ocean to teach islanders truth, loyalty and faith. At first the village people were suspicious of the newcomers but soon many grew to love and respect the Christian family. However, the witch doctor, the chief and many of the head men resented them being there. They decided to counteract the Christian influence by importing some Islamic leaders from an island nearby.

The plot thickens when the Christians were confined to the seashore while most of the villagers climbed a mountain to escape a gigantic tidal wave that was created by an erupting volcano on an island close by. Read how God intervened and miraculously delivered his servants from serious accidents, destruction, and immediate death. A very exciting and thrilling story!

Norma Rhoads Youngberg was born in iowa and grew up in South Dakota. She comes from a family of teachers, missionaries, and writers. Her father, the late Bert Rhoads, taught school for fifty years and has written several books for children; her sister, Mildred R Bennett, is a recognized authority on Willa Cather.

In 1916 Norma Rhoads married Gustavus B Youngberg, a Protestant missionary, and she and their first child went with him to Malaya in 1919. The next years were spent in Singapore, British North Borneo, Sarawak, and Indonesia. They pioneered work among headhunters on the Tatau River of Sarawak. During twenty years of service they became parents of five other children, all of whom are now engaged in some form of Christian endeavor, either as doctors, nurses, or teachers. In 1940 the family returned to the United States.