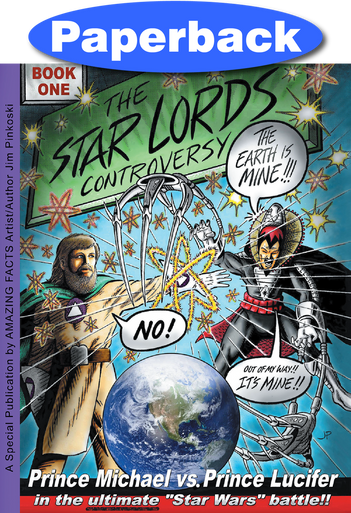 The Star Lords Controversy: Book One is a full-color, fully illustrated 32-page book telling The Great Controversy in the art style of the popular Star Wars movies! This book is written and illustrated by Jim Pinkoski, the best-selling artist/author of eight Bible Study books for Amazing Facts that have sold a half million copies over the past 30 years. The focus of this Star Lords book is on the pre-incarnate Jesus when he was known as Michael the Archangel, and how Michael had to deal with Lucifer's rebellion and the war in heaven that has spread to involve the planet Earth and the entire Universe. The main theme of this book is, "The Bible is the ultimate 'Star Wars' story," and it is ideal for both teens and adults of all ages.

Book One covers from the Creation of the Universe to the Crucifixion of Jesus; and Book Two will cover from the Resurrection to the 2nd Coming, and will be published in 2016 -- this project is based upon the 1981 "Star Lords Saga" book series that was conceived and written by Roland Hegstad, the editor of Liberty magazine -- and this new book is available just in time for the world-wide release of the hugely popular new 7th Star Wars movie, it's a perfect witnessing tool to be shared with the millions of Star Wars fans all over the world!