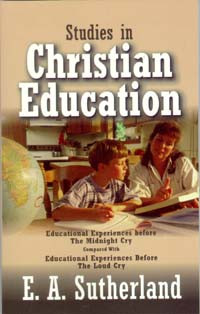 E. A. Sutherland gave a series of lectures at the Nashville Agricultural and Normal Institute which were put together to make this book. He reveals the fact that the great Protestant denominations failed in giving the first angel's message in full because they did not free themselves from the papal system of education. The Seventh-day Adventist denomination came into being because of their failure, and it must succeed where others failed. Their birthright as a denomination is a great reform movement, the greatest the world has ever known. The Lord has been telling our people that, as individuals, we are in positive danger of suffering the same defeat as they suffered because we still cling to worldly methods of education. We are soon to enter the latter rain. We need to prepare our youth now. This book is a blueprint of what our schools should be.

This is a photo-offset reprint of the original 1915 edition. In later editions all statements relative to the controversial subject of accreditation were eliminated. This edition retains all such statements, just the way it should be in all our schools.