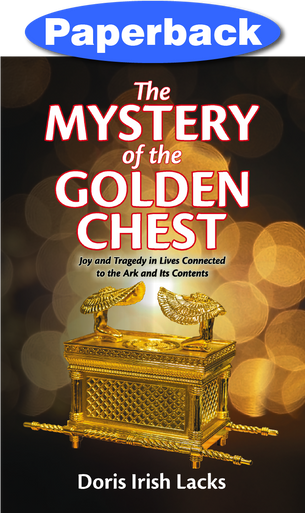 Mystery of the Golden Chest, The / Lacks, Doris / Paperback / LSI

Somewhere in the Middle East, a mysterious, golden chest has been hidden from the human eye for thousands of years. No one knows its location, but many have searched for it, hoping to be the one to solve the mystery: “Where is the ark of the covenant?”

The story of the ark begins, not in its creation under the direction of Moses in the desert, but in heaven, in the midst of the war between Satan and God. The fruit of that war was a fallen earth, and the answer to our salvation is part and parcel of why the ark was made. The contents of the ark of the covenant are the center of the life filled with the grace of Christ.

Someday, when Jesus comes again and reveals the ark’s hidden location, long-held mysteries will be solved. But, in the meantime, here is the story of the golden ark, its special contents, and its impact, not only on those who beheld it but on those of us in this world at the end of time.

Available in Paperback and e-books.

Doris Lacks has been a Seventh-day Adventist for over seventy years. In that time, she has been a pastor’s wife, a children’s Sabbath school teacher, a ladies’ dean at Southern Missionary College (now Southern Adventist University), and an administrative secretary at Clarkson University in New York. She graduated from the University of Iowa with a music degree specializing in Trombone Performance. Doris is currently retired and lives in New York state near the Canadian border. In her spare time, she likes to read, write, and enter 5K races. She says, “I always win … because I’m the only one who runs in my age group!”