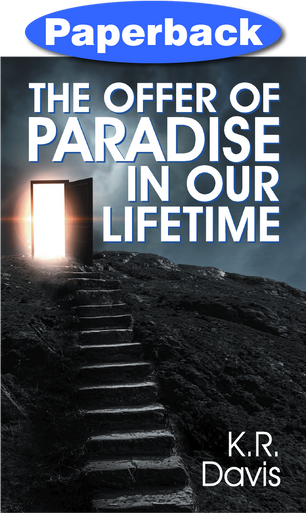 Offer of Paradise in Our Lifetime, The / Davis, Kenneth / Paperback / LSI

Though it is God who prepares each of us for our entrance into eternity, Kenneth Davis, the author of The Offer of Paradise in Our Lifetime, is convicted that this is not a spectator sport, especially in these moments of history. This volume is a Bible and Spirit of Prophecy-based discourse on the role we have in hastening Christ's return and the end of this sin-tarnished planet. Found within these pages is a prayerful and systematic search into the question of what is keeping the Lord's finishing touches of salvation on hold.

Many, even within the household of faith, find themselves troubled over the thought of hearing reports indicating that the end has come. While believing in the second coming, the sense of its imminence is frequently a source of hesitation. Could this have something to do with our uncertainty over whether we are ready or not?

With that said, good news is coming. Readers will examine how the power of endurance and readiness, available to young and old, is enlarged by an understanding of God's plan of granting His saints today an indispensable role in the timing of the end. This role encompasses unity on simple but specific commitments of faith. Our reward will be the privilege of claiming the promise of His return within our lifetime as a reality, not speculative sensationalism. This privilege includes a precursor—cooperating with and being filled by the Holy Spirit to an unprecedented measure—that we may ultimately reflect the image of God and more effectively draw a countless multitude from every nation, kindred, and tribe into His fold.

Kenneth Davis, a Denver-area native, works with patient care equipment used by hospitals in the Colorado area. His initial and growing awareness and anticipation of Jesus' second coming, which began during his childhood, as well as his increased disenchantment with the world's continued unraveling, have prompted him to dive into this literary undertaking. As Kenneth looks forward to that glorious day and seeks to help speed up the process, he does enjoy this present life, especially when he spends time with his wife and three children in the great outdoors—the mountainous regions of western Colorado.