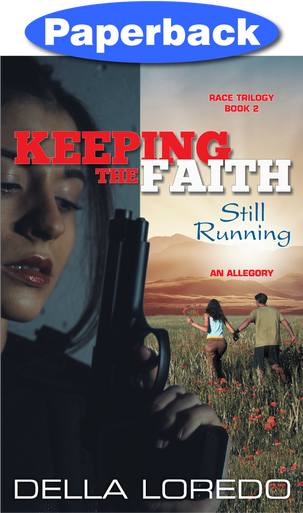 Susana was living the dream she had never thought possible. Having finished Doug Damour’s 6,000-mile cross-country footrace, she had become an heir to his vast fortune. He’d even healed her of the disfiguring burn scars that had repelled people on sight. Now, thanks to Doug’s generosity, she was actually married, not to mention pursuing a doctorate and looking forward to starting her own family. Never had she imagined herself in such a privileged position!

But her picture-perfect bubble abruptly popped when her new husband, Chris Strider, landed on the enemy’s “List.” Battling her fear of the unknown, Susana clung desperately to her dream. Yet Doug insisted that she must surrender everything to him, including Chris.

Surrender. Trust. Faith. The words haunted her. Could she trust Doug with her most precious gifts?

Della fell in love with books at an early age and began writing shortly thereafter. Her first piece of fiction was "published" in the form of a play that her sixth-grade class performed for a school assembly at Saticoy Elementary School in her home town of Ventura, California.

She completed a B.A. in psychology and an M.D. at Loma Linda University in California. Her residency was completed at Baystate Medical Center in Massachusetts. Following this, she worked for the Public Health Service in rural Alabama and then returned home to California, where she joined a private practice in Ob/Gyn. After contracting viral encephalitis (an infection of the brain) in 2001, she rediscovered the joy of writing while convalescing.

Della now lives in San Diego with her husband and an ever-changing brood of pets.